Klinefelter et al did Not Write About Klinefelters Syndrome!

(“et al” means “and others” if you’re not aware?) So there was I hearing about the so-called “stigma” some claim is attached to this disease I’ve been treated for since 1977, and it struck me to go track down Dr Klinefelters original report. I have “tracked” it down many times before, I just never bothered to save the link. So obviously I wasn’t going to be searching for “Klinefelters Syndrome” as he didn’t write about “Klinefelters Syndrome” did he! No, no, no, his report is titled “Syndrome Characterized by Gynecomastia, Aspermatogenesis without A-Leydigism, and Increased Excretion of Follicle-Stimulating Hormone” and the opening line of the abstract says “The syndrome under discussion begins during adolescence……” Is this an “oh bugger” moment for all those who think they were born with it? I think it should be!

I splash that image over most of my most recent videos, people need to be reminded we develop these symptoms of disease Dr Klinefelter et al described, but not all of us.

And there is no stigma attached to being XXY or having KS either. I attended a conference on XXY/KS in Torrance LA in 1997/8? and there were hundreds of us there, and nobody mentioned anything about a “stigma!” if this “stigma” actually existed do you really think XXY guys would actually turn up from all over the USA and world to a publicly advertised meeting? I think this claim of a “stigma” must be a more recent invention. Possibly it was invented by the XXY’s who claim they’re not really male? Or don’t identify as being male? It’s much easier to stay hidden away if you pretend you’re something you’re not, then you never have to prove a thing, you just say it, secretly.

Well this XXY has always been male, always will be male, and delights in “Gender Euphoria” – I’m proud to be male, which is not a disease, it is a fact of reality. I am really male.

I see even medical so-called professionals try to maintain my Y is contending with more X’s than the average MALE, which is an absolute fallacy, complete rubbish. I do contend that the additional X interferes with the function of lots of my cells, like when I had them my teeth cells, and I still do have brain cells, but no testes cells! I joke with the uninformed, “Not only my teeth are artificial!” That is quite funny, if you’re capable of laughing at me? I’m capable of laughing at me.

Here’s another funny one, I used to have tiny testicles,

now they’re the biggest I saw in the catalogue. The nurse at the plastic surgeons office said “Which one do you want?” and I said “Both of them!” I could see a smile slowly spreading across her face, then she shut it down, can’t be seen laughing at the guy with no balls! She actually meant, if you missed it “Which brand of prostheses do you want” not “how many balls do you want?” Oh well I thought it was funny, I guess you had to have been there, and I was!

The problem with these people who maintain we XXY males have 2 X’s activated in our cells 100% of the time, is that they are WRONG. XXY males have no more X’s active in their cells than any other person on the planet. No matter how many X’s you have in your cells, only 1 is activated. If you think about it, females ought to have a lethal dose of X genes if that wasn’t true, but females with 2 X’s clearly exist, they are not mentally retarded, and they achieve that great feat by X inactivation.

With females their process of X inactivation is called “random” which basically means X’s from each parent are turned on and off on a fairly regular basis, whereas XXY males have “skewed X inactivation” and that is what causes our problems, 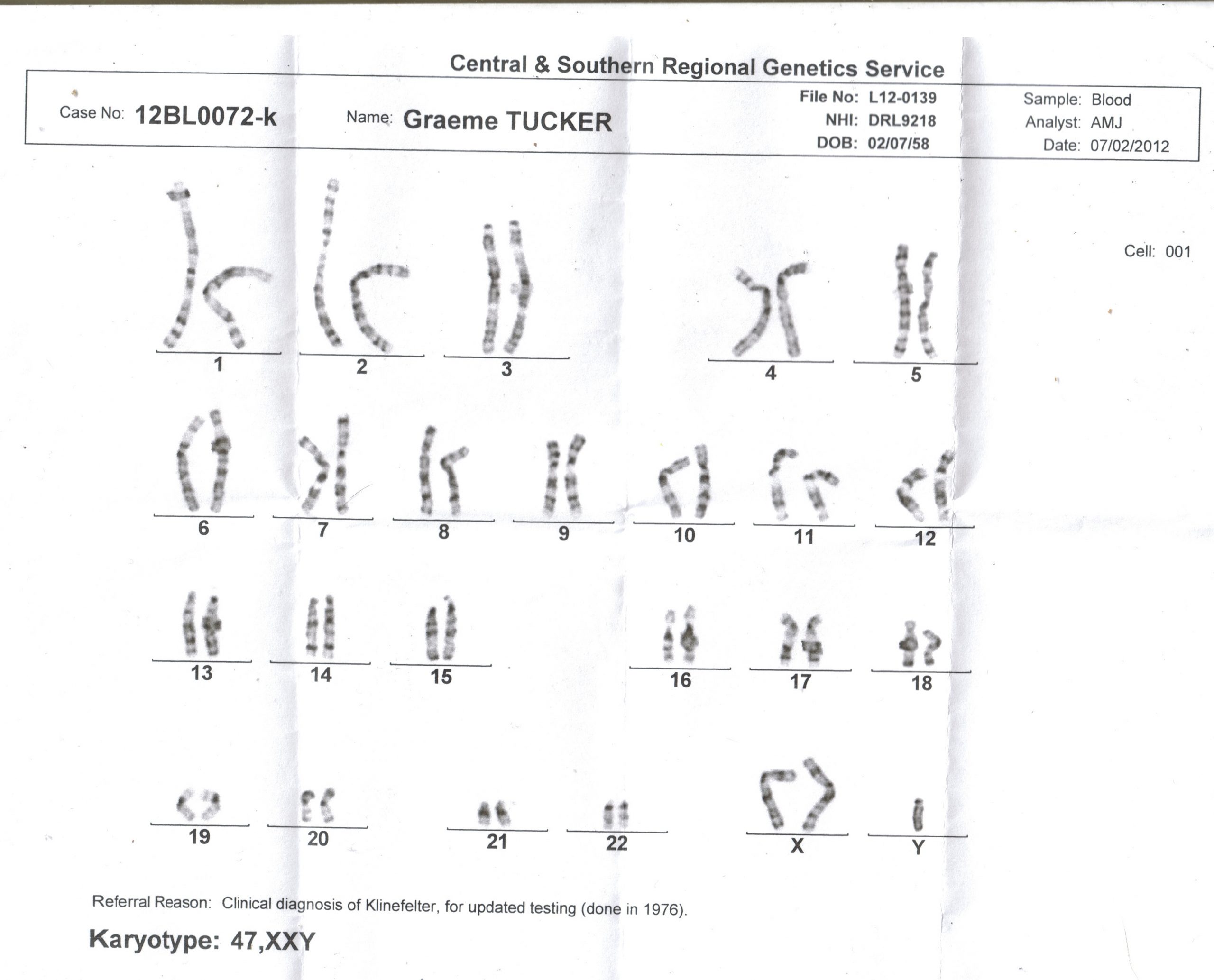